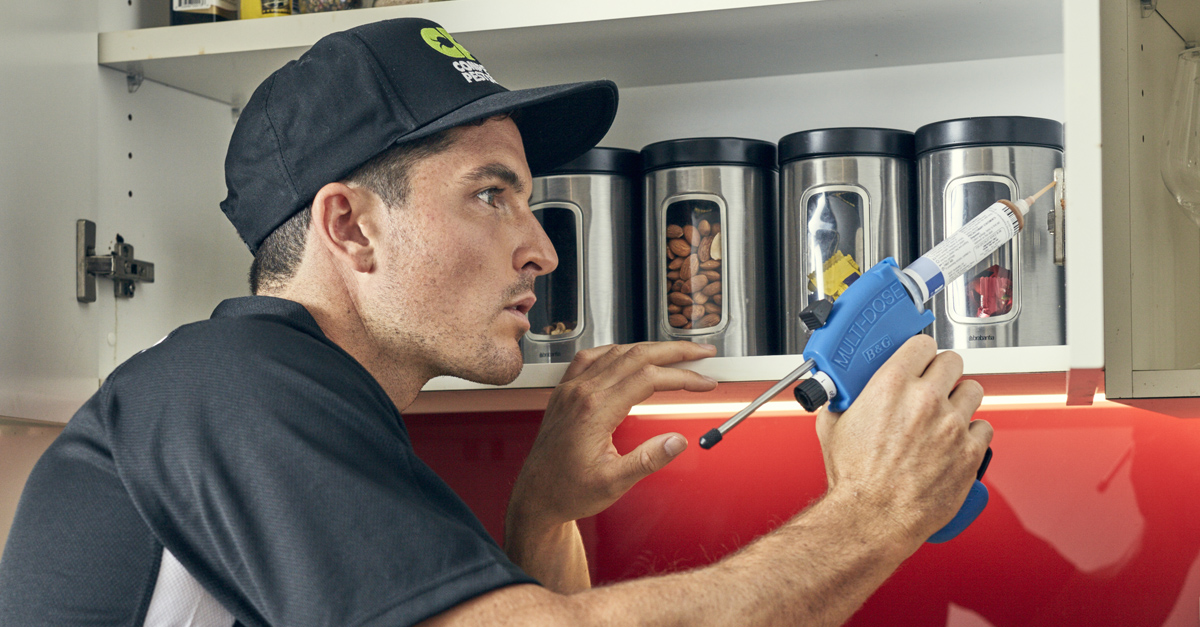 The formidable appearance and size of spiders makes them the most feared of all the creepy crawlies. However most spiders are harmless and avoid people.

Among the most common found in Australia are the Red Back, Black House Spider, Huntsman, Funnel Web, White Tail  and daddy Long Legs. 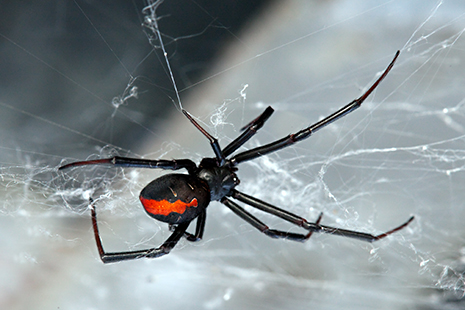 The Red-back has a poisonous neurotoxic venom, and a silk that isn’t sticky, so they create a web that other insects get entangled in and they immediately attack. The web is built like a scaffolding system and when a string breaks it pulls the prey into the air, where it dangles until the spider gets to it. This allows the Red-back to attack insects much bigger than itself. They lay spherical cocoons containing up to 200 eggs. In ideal conditions they can lay several eggs in a session. The female will be no larger than a 50-cent piece and the males are much smaller and not normally seen. The spider will feign death when disturbed.

They are more prominent in warmer humid areas, and will set up where their web can make contact with the ground. They frequently set up around window sills, and crevices in brickwork. Female bites are very painful and sometimes the initial bite is only felt as a mild sting. The pain can then feel more like a burning sensation, and the bite can also cause major illness or death. Males do not bite, and only adults are considered pests. 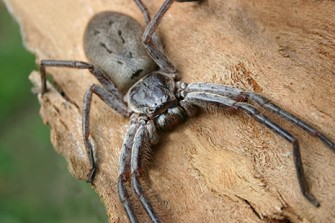 The Huntsman spider is a crawling hunting spider, it can moved rapidly and sideways. It has a flattened and hairy body and can be quite large – females are typically 30-45mm and males, 15-25mm. The Huntsman is a non-aggressive spider and will avoid defending itself, preferring to flee away from danger than fight it. The eggs are flattened and circular and usually hidden away with the female under bark or nearby shelter.

The Huntsman is nocturnal and are often spotted on walls early in the evening, searching for food. When they have found their prey they strike with their strong bite from curved fangs. They are found all over the country and are the most common spider that people will encounter in their home. Bites occur very rarely and there are no known fatalities from a Huntsman’s bite. The bite can be painful and general swelling can occur, and sometimes dizziness, vomiting and fever are also present. These symptoms are more severe in children. 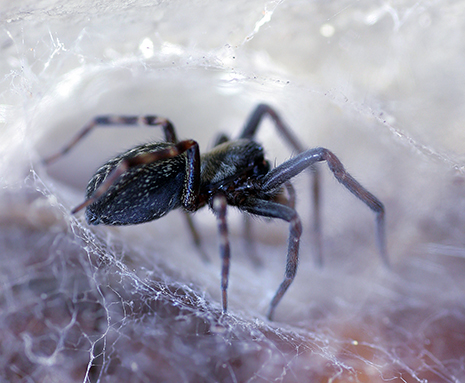 The Black House Spider is another very common spider that you will encounter around the home. Females are larger than males at 15-18mm compared to the male at 8-10mm. They are black or very dark in colour. They are a very timid spider and retreat when approached, the web is often unsightly on buildings and can be lacy often built around windows, doors, eaves, and guttering. They will set up where food sources are abundant. The female will lay eggs with her web and stay with the eggs until they hatch, the young then stay with the mother for some time, catching smaller prey that the older spider would usually ignore. The bite of the Black Spider is very rare due to it being so timid, but if it does occur the bite can be excruciatingly painful and cause local swelling. The bite may also cause nausea, vomiting, sweating, giddiness, and in a few cases multiple bites have caused skin lesions. 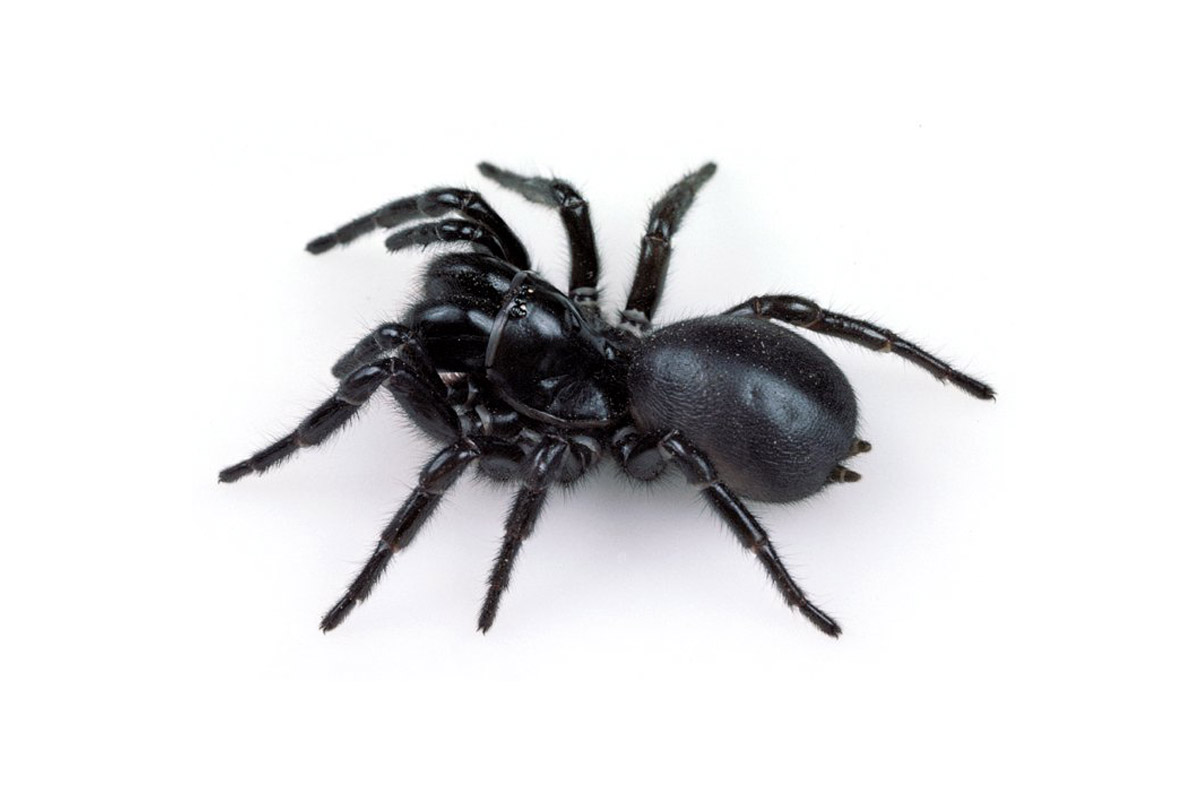 The Sydney Funnel Web Spider lives in moist soil areas along the Eastern coast of New South Wales and Victoria. They are probably the most feared of all the spiders due to their aggressive nature, toxic, fast-acting venom and stocky body. The spider has some distinctive identifying characteristics: it is black in colour, the eyes are closely grouped together, the fang bases extend horizontally from the front of the head with the long fangs lying parallel underneath, and the female is larger than the male. Funnel Web spiders live in burrows in sheltered positions in the ground, or in stumps, tree trunks or ferns above the ground. Their burrows are lined with a sock of opaque white silk and several strong strands of silk, with several radiating from the entrance.

The male Funnel Web is the one most often seen out in the open, or if you are unlucky, in the home. This is normally during warmer or wet weather when he is out searching for a mate. In contrast, the female is more sedentary is rarely seen, as she spends almost her entire life – sometimes up to 20 years – inside the burrow, only venturing out momentarily to grab passing prey. Prey consists of insects and small vertebrates such as lizards and frogs.

The Funnel Web is a highly aggressive spider – when backed into a corner it will strike out and attack very quickly – and its venom is highly toxic, therefore you should never approach the spider. If you come across one, leave it alone. Funnel Webs occasionally fall into the backyard pool. This does not mean the spider is dead: they can create a bubble of air around themselves, which aids breathing and buoyancy, and have been known to survive under water for 24-30 hours. If you see one on the bottom of the pool, do not touch it, instead fish it out with the net and discard it away from the home. If bitten, its important you keep calm, pressure bandage the limb and collect a specimen even if you have squashed it. Then seek medical attention urgently. There have been no recorded deaths from a Funnel Web spider since the introduction of anti-venom in 1981. 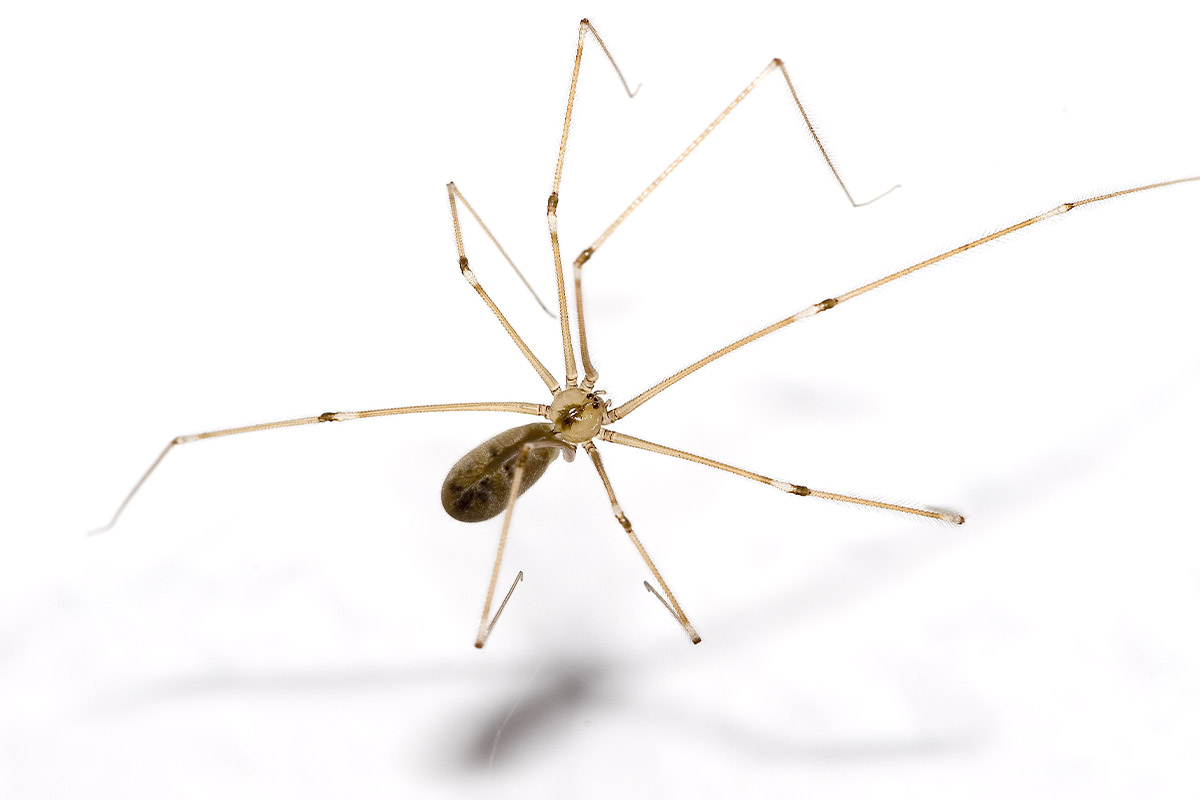 The Daddy Long Legs spider is one of the more common spiders found in the home. They are characterised by their long legs and tiny body. There is a common misperception that their venom is the most potent in the world, this however this is not true. The myth probably came about from the Daddy Long Legs being seen killing and eating a Red-back spider. The female lays eggs and sometimes carries them in her palps. They spider spins a very loose web around places of human habitation, including sheds, garages and in the home. They are more of a nuisance than a threat, and they will feed on other insects or spiders. Treatment is very easy and in the home a regular dusting of their harbourage points will help keep them away. White-tailed spiders are common in urban environments where they are often found wandering at night looking for prey – mainly other spiders such as Daddy Long Legs, Huntsman, and Red-backs. The White-tailed spider is recognisable by the distinctive white spot on the rear of its abdomen. Females have a plump abdomen and can grow to about 20mm long, while the males are smaller and only grow to about 10mm long. They don’t have webs and will just wander slowly in search of prey, sheltering in dark, hidden places during the day.

When females lay eggs, they create a silken brood chamber in a dark place. When the young emerge from the eggs they will immediately hunt small prey independently. The White-tailed spider has a bad reputation, but there is no proof that their bites cause skin lesions. The reason why bites are so common is that the spider will often shelter under clothes or bedding, making human contact with the spider inevitable.