There’s a nasty rumour that Australia is home to the world’s most dangerous spiders. This had led many locals and tourists becoming terrified of every eight-legged thing that skitters across their floors.

Fortunately, despite their screech-inducing reputations, most spiders are harmless, even though they offer bustling work for spider control in Sydney. There are also many misunderstandings when it comes to spiders. For instance; a white tail spider bite won’t kill you and huntsmans aren’t as terrifying as they look.

Of course, their rather benign nature doesn’t make it any less creepy when you get attacked by unseen spider webs. Read on to learn more about some common Australian spiders. Some spiders like it wet, but redbacks prefer dry, low traffic spaces.

They might nestle beneath your toilet seat, inside your mailbox, or out in the garden shed. It’s easy to spot them because they have a large belly with a distinctive red stripe that stands out on their pitch-black bodies. Fortunately, that intimidating appearance comes with tiny fangs, but they’re still much better to see in a safe environment, such as the Australian Reptile Park, rather than in the flesh.

While redback venom can be quite potent, their diminutive fangs mean minimal amounts are released when they bite you. It’s thought that roughly 2,000 people get bites every year, but only about 250 require antivenom. Bites can be painful and will continue to hurt for several hours or even days, but the effects usually wear off on their own.

The female redback does most of the biting. She is larger than her male counterpart, and her bites cause lethargy, nausea, and general malaise. Ordinary cupboard spider bites can cause similar symptoms, so try and get a good look at the spider that bit you. It’ll help you get the right antidote. Note that redback antivenom will also cure cupboard spider bites. 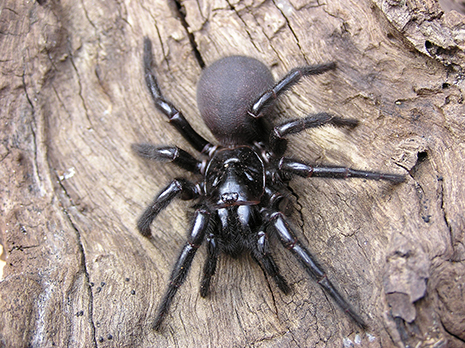 Despite its benign-sounding name, the Sydney funnel-web is considered one of the world’s most dangerous spiders. It has tough fangs that are larger than a brown snake’s, with the ability to pierce through toenails. You really don’t want to encounter them barefoot. Might we suggest a visit to the Australian Reptile Park for a closer look?

Unlike many other Australian spiders, its head and abdomen are about the same size. Its head and legs are black while it’s lower portion is a malty brown. It also has a rather compact leg span. The venom from a male can kill, but since the spider is common in New South Wales, antidotes are readily available, and we’ve had no fatalities in the recent past.

The Sydney funnel-web mostly stays away from humans, preferring to remain in forests and greenery where they create burrows with intricate trip lines leading out from the burrow opening. They might take a swim in your pool or look for dark, humid corners of your home. They can get aggressive if you bump into them, so if you identify one, give it a wide berth. 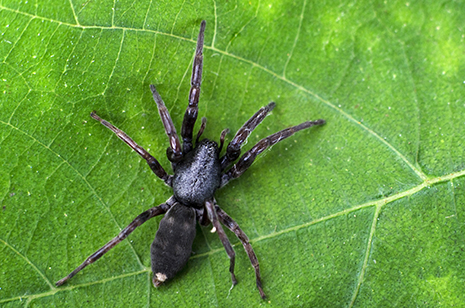 Like white-walkers, white tailed spiders are often assumed to be zombie cannibals. The cannibal part is true, as these nocturnal predators hunt other spiders. As for the zombie part? Perhaps we’ve been watching too much TV.

A white tail spider bite is also rumoured to produce flesh-eating venom, though there’s no scientific evidence to support this urban legend. And while they do have an icy white spot on their tails, they’re not undead. White tails don’t burrow like many spiders, nor do they build webs or erect trip lines.

They’re vagrant, and a white tail spider bite won’t do much harm. It causes mild pain on the surface of the bite, but that’s about it. You won’t need antivenom, and humans are relatively safe from it – unless of course, you’re a spider, in which case, if you see a white spot on the back of an approaching spider… scatter!

The adorably named mouse spider is often mistaken for the Sydney funnel-web since they look so similar.

With a bulbous head and jaw plus a shiny black appearance, they certainly resemble their deadly doppelganger in many ways. Mouse spiders are also capable of producing a potentially lethal bite, however, they are nowhere near as aggressive as the Sydney funnel-web. Despite this, medical attention should be sought immediately if you succumb to a bite from one.

One positive aspect of this spider for Sydneysiders is that they’re generally found in country and rural settings.

Wolf spiders have a wide distribution area and can be found in practically every environment in Australia, from sand dunes and gravel pits and especially across dry inland areas.

As opposed to other spiders, they prefer to live on the ground amongst leaf litter and decaying vegetation in lawns or gardens, where some species hunt small frogs and toads. Several types of wolf spider build burrows, however, many instead wander in search of food and mates.

Even though this agile little Australian spider can incapacitate large animals relative to their size, a bite will only produce minor symptoms in humans. Still, caution should be exercised if you do happen to encounter one in the wild.

Huntsman spiders are known for popping up in unexpected places and scaring the daylights out of anyone unlucky enough to encounter one.

Notwithstanding their hairy appearance, wide leg spans and large size, they are considered to be relatively harmless to humans, with bites producing some dull pain in much the same way as a white tail spider bite. They can range from grey to brown and have flat bodies that help them hide in cracks, crevices, under bark and of course, your vehicle’s sun visor. In short, you won’t need to book a trip to the Australian Reptile Park in order to see one.

They are also able to press against a surface and move laterally in the same way as a crab moves, hence their other known name, “the crab spider”. Huntsman spiders are found throughout Australia, although Tasmania has only a few recorded species.

Common orb weavers are part of a large group that contains over 100 different species within Australia. They are small and stout with wide leg spans and triangular-shaped abdomens that often have white spots or white patches on them.

As a species, they’re also known to inhabit practically every part of our nation, however, common orb weavers are decidedly more prevalent in eastern and southern Australia. The reason for their name is that they’re known to spin suspended, wheel-like webs and trip lines in the gaps between vegetation. This web is erected in the evening and taken down at dawn, with the spider itself waiting in the centre of the web for prey.

Note that while orb weavers can bite humans, they are reluctant to do so. If you are bitten, you should expect mild symptoms that only last for an hour or so. Medical attention is recommended if these symptoms persist for an extended period of time.

To get rid of unwanted spiders in Sydney, call Competitive Pest Control Services today on 1300 395 769.

Read Our Other Posts