Why do huntsman spiders come inside?

Huntsman spiders, they are a pretty frightening sight, some have been known to grow up to 12 inches in length! Usually end up in your house with relative ease as many huntsman spiders have very almond like bodies allowing them to fit under the rocks and the bark of trees where they live.

This also allows them to squeeze around closed doors and through other gaps into your car and under doors and windows into your home! It is wise to check around your house from for huntsman spiders egg sac, whilst usually these would be produced outside, they can be found in many Australian houses.

You shouldn’t be too worried about a huntsmen bite as despite the size this species of pests are unlikely to act aggressively. Although they may be looking for potential prey, huntsman spiders will often find their way into your home during the warmer months to get away from the summer heat.

Squeezing into gaps under doors and windows is natural behaviour and so makes them feel right at home. 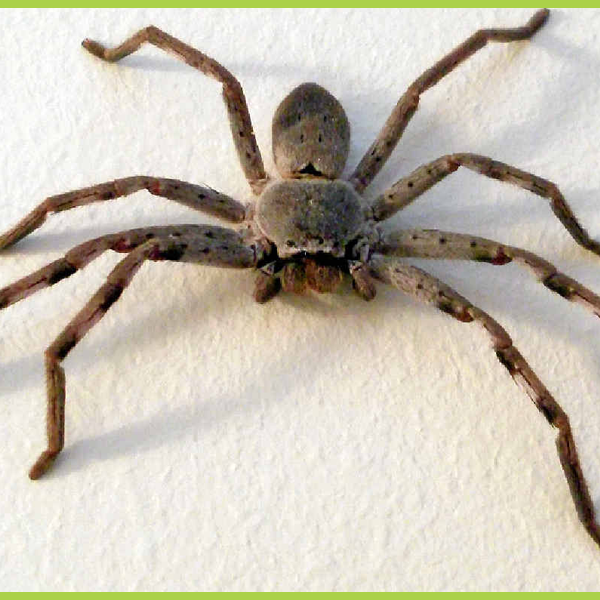 How do you keep Huntsman spiders out of your house?

One of the best ways to prevent insects such as huntsman spiders coming into your house is to make sure your garden has other prey insects for them to eat so that they don’t end up in your place looking for prey.

You will be more likely for you to find these spiders inside if there is no food to be found across your garden for the huntsman spider to pray on, as a side note, planting eucalyptus or lavender underneath windows in your garden will also deter spiders from entering your house.

A easily made solution to the issue that works fast is to create a spray with peppermint or citrus, whilst they smell nice to us, spiders absolutely despise these scents which will prevent them coming into your property if you are to regularly spray down potential entrances.

From time to time help may be needed. Pest control services may very well be your best option when tackling these unwelcome guests in your home, their solutions can quickly and effectively solve your spider problem and give advice on how to prevent future issues.

Where are the huntsman spiders generally found?

Huntsman spiders are most often found in warmer climates like Australia most huntsman species are native to Asia. Yet they are also prevalent in Africa, Australia and South America.

Because of this if you live in a colder climate you are in luck and can sigh a breath of relief as there is close to no chance of you encountering one of these creepy crawlies. This being said there have been a few instances of the huntsman spider being accidentally introduced to countries, usually via shipping containers.

They have been introduced accidentally to parts of the USA, Pakistan, India, China, and Japan. In terms of places they are found in the wild they seem to favour wooded areas such as forests, wood piles and sheds.

Huntsman spiders have been known to bite people but they are not generally regarded as being a danger to humans. The chances of being attacked is highly unlikely

Huntsman spiders do have the ability to bite but again, the chances of this are very low and will only strike when agitated so stay back. If you are bit however you can expect to have some swelling and may need medical attention.

What to Huntsman spiders do and what are their mating habits?

As adults, huntsman spiders do not build webs, but hunt and forage for food: their diet consists primarily of insects and other invertebrates, and occasionally small lizards and geckos. These spiders prefer to mate when the weather is warm and humid.

Unlike some other species of spider, the males are rarely attacked by the females after mating. When she is impregnated, the female builds a large silken sac where she lays her eggs – around 200 (bad news non spider people). The sac is placed under bark or a rock and she will stand guard for a few weeks.

During this period the mother can be quite hostile and will rear up in a defensive display if provoked. When she is ready she opens the egg sac and releases her little spiderlings into the world.

The babies start as a pale colour but will soon take on their distinct grey or brown colour in the weeks that follow.